Living in a money-minded, wealth-oriented society has an inherent effect on our humanity. It is kindness that set us apart from animals. It is benevolence and benignity that keep the Earth balanced… But…

The balance is slowly shifting. The scale tips more towards money than towards charity.

It is true that most doctors are kept in a rather high pedestal. People treat them as gods, or one step below that, as often than not. We depend on them on the saddest of situations, run to them on emergencies… But how many of them have the innate sense to look at their profession as a duty to humanity, a duty to society? Mostly, none.

It has become a source to earn back what they have paid for years of expenses. The impact money made on most of them… Is beyond words. And it is sad.

They say a smile cure diseases, but these doctors’ often have a scowl adorning their face, that might increase our blood pressure!!!

Oh, it has become rather difficult.

I fear the doctors these days, than the diseases. I fear their grimaces, their scowls more than the viruses.

…
It was an ordinary night for a five month pregnant woman… Vomiting a little, dizziness… Until she saw the blood flooding down her legs, drenching her sheets, pooling on the floor. Exactly at 11.45. The puddle of red made her stomach twist, her breath stutter. With a cry of despair, she ran, heart in throat. She called for help, her tears running down along with the blood.

Pain, so severe squeeze her heart. She had already lost a baby years ago, and she didn’t think she had the strength to go through it the second time. She whispered prayers, her voice choked.

Hugging her mom, she sobbed until she couldn’t anymore.

‘It would be alright, alright.’ The voice of her mother tried to soothe, but it broke, as well.

She  held on to her tears then, ready to hope that this wasn’t another tragedy, that her baby was safe and sound inside the cozy comfort of her womb.

When the car drove towards the usual hospital she was doing her checkups, it felt like it was going at the pace of a snail. She could feel the cold draft hitting her tear stained cheeks. She wasn’t crying, anymore, but her heart bled along with every hot spurt of blood she could feel…

Her doctor was out-of-station and she clutched her stomach…

Another hospital, boasting 24 hours service and she wondered of it was too late, already. But she held on. To hope.

She could see the light, the nurses milling around inside the empty hospital. They were chattering and laughing. She could hear the peppy conversation, and could hear the silence at the end of each laughter.

She watched her dad and uncle walked in, along with her mom. They talked…

‘Have you done your previous checkups here?’

‘We don’t take pregnancy cases, when you don’t do regular checkups here.’ One of the nurses said.

‘She is bleeding, a lot. It is an emergency.’

‘But… We don’t take pregnancy cases…’

She could hear it all… The hiss of anger in her uncle’s voice. The pain in her mom’s voice…

‘What’s the purpose of running a hospital, if you don’t take the patients during emergency? Is it what you call doing a service? Where’s your heart? Where’s humanity? Are you running a hospital or a damn money-grabbing centre?’ My uncle asked.

She wondered…. Whether these woman strutting in the pure white skirts know the symbolic meaning of the color they wear? They wouldn’t  have known, or they would have just spared her a look…would have looked at her fear and considered a little.

And she cursed… Cursed them with all her heart…
…

Yes, my child was safe and sound now, thanks to another hospital and a doctor who decided to wake up… But that incident, it has made a dent in my belief of humanity… And it still angers me, how I was neglected, how my tears were discarded…. Just because I don’t go there for a regular checkup.

It shook my trust in kindness, in doctors…

Would their conscience have nagged, if something terrible happened? Would they have felt regret and guilt and shame? I know…. They wouldn’t have and that is the greatest downfall of all…

Oh, we cherish money, we cherish comfort… And along the line, we are ready to ignore if we become the reason for a murder, indirectly.

Dear doctors,
What you’ve taken as a profession is a weapon… to save lives… Not a butcher’s knife, to cleave and murder. Yours is a generous profession, that must be nourished with kindness and humanity and it is about time you wake up from the slumber, and look beyond money… Please, lives depend on you… Don’t crush them under your feet…

This blog post is inspired by the blogging marathon hosted on IndiBlogger for the launch of the #Fantastico Zica from Tata Motors. You can  apply for a test drive of the hatchback Zica today. 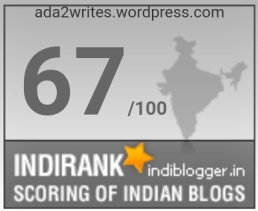